The start to the morning today was really fun. I got up early to see a nice Australian couple off. They got here late last night and were leaving early this morning, so I got up at 6a.m. The giraffes weren't here yet, so I opened the windows of the dining room and put some giraffe pellets in a bucket and shook the bucket. There wasn't a giraffe in sight and the tree line is about 150 meters away. Within minutes, I could see 7 giraffes running toward the manor through the brush. It reminded me of the whiskas commercials when the guy shakes the bag of cat treats and the cat runs through the walls. :)

Well, that was more or less the highlight. Just after breakfast I started getting sick. I guess I caught some kind of bug because by the time we got to the Elephant Sanctuary this morning, I wasn't feeling too hot. We got there a little late yesterday. By the time we got there, there were probably 100 or so tourists wanting to see the elephants, so it was difficult to get clear pictures. Today we wanted to get there early. Gaye was nice enough to suggest that we go back to the hotel and forget about it. I asked Gaye to go ahead while I rested in the car for a few minutes seeing as we were early anyway. That didn't last very long before I was trying to discretely puke my guts out  between the car and the bush. I just happened to be wearing my work t-sirt that says on the back "I have a high threshold for your pain". Well, the African cab drivers were watching me hurl from hehind me. They weren't trying to be mean, but they couldn't help but laugh at me because of the shirt that I was wearing. I think they felt it was sweet justice or something. Anyway, we had our little laugh, I still managed to catch the elephant presentation, then we went back to the Manor and I slept most of the day. We missed out on the monkey forest, but that's alright I suppose. I need to get better before tomorrow because we are flying to Arusha on a small bush plane, then driving to Tarrangire and I certainly don't want to be sick for that or it will make for a very long day!
Last night we visited Sities as she went through her evening routine. The above video shows one of the stalls that the elephants sleep in at night. The keeper has a bunk and he sleeps with his elephant every night. Elephants are very social animals and as infants, they need that reassurance that a mother or father figure is with them at night. Most of these babies have either fallen down a well or they have watched as their mother was killed by poachers for her ivory. They can be quite traumatized and very sick when they get here, so the keepers do everything they can to ensure the comfort of the animals. These people are about as dedicated as I have ever seen. The keepers only get four days off per month to see their families. Otherwise, they are essentially taking care of their elephants 24/7.
Today was obviously a bismal photography day at only 268 images. On the bright side, I did manage to get a couple good shots in. 16,899 images to go.
That concludes the first leg of our trip. Tomorrow we fly to Arusha, then will drive out to Tarangire National Park and will stay there for a couple of days. From there will go to up to Lake Manyara National Park, then Ngorongoro Crater for a day and a bit. We will drive back to Kilimanjaro airport where hopefully we will pick up an internet signal for a few hours before flying out to Nairobi and then to the Masai Mara.
Check out our main wildlife photography website and our main wildlife photography blog.
View pictures of elephants from Tarangire National Park.
Be a Fan
Posted by Fit N Well Inc. And HW Photo & Safaris at 10:12 AM 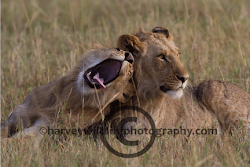 Fit N Well Inc. And HW Photo & Safaris
Greg is a wildlife photographer and tour leader and personal trainer. He manages both small businesses as he has always had a passion for both industries. Join Greg in Africa on a safari adventure or if you live in Edmonton and are interested in fitness, health and weight loss, he can assist you with your fitness goals.